Who are the VSCO Girls? 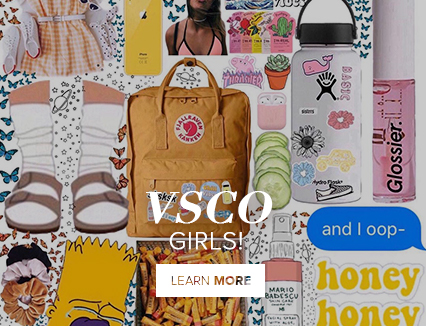 In recent months, the VSCO girl has become inescapable in certain parts of the internet where teens flock to. But what does it mean? The name comes from VSCO, a popular photo-editing app, known for its dreamy “is that a film camera?” filters. And the VSCO girl has a set uniform as well: crop tops and oversize tees that eclipse one’s jean shorts, scrunchies, and a dewy “I woke up like this” face. Converse and Vans are also classic footwear choices.

The VSCO girl is kind of the current day version of preppy, but with a beachy twist. According to VSCO co-founder Joel Florey, its user base is mostly 13 to 24-year-old females and unlike other platforms has no public like or follower counters. This lowers pressure to post content for likes and followers.

Once it was a big trend on TikTok, a lot of girls started dressing more similar to VSCO girls. She’s the new incarnation of the cool girl. It’s a random assortment of products and interests that links back to being free-spirited and eco friendly. Just as the world has become more eco-conscious, VSCO girls have turned it to a fashion accessory.

If you searched deep, you’d probably find a VSCO quality in you as well. After all this hype, is the VSCO girl here to stay? We think so… at least for the next year.